Some good progress has been made but certain things were delayed since I had a surgery two weeks ago. I finished the new “furnace” system. You can now smelt ore into bars using wood as fuel. This was actually a pretty big change in order to get this working correctly and sync correctly to multiple players. 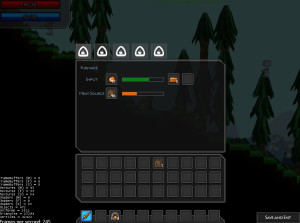 A first pass at adding more advanced crafting into the game

I also finished the status effects system. It is pretty slick. For example, I can add the “stunned” component to an entity and it will automatically handle both the client and server side of those effects. Even better, that system is pretty open so it will be easy to take advantage of it for modding. Stun is also now a spell part which can be used in spell creation.  It will have a pretty stiff mana cost requirement attached to it though since it is a full disable.

One of the sticking points I’ve had with content creation is managing the export of art from photoshop files to the image files the game engine uses. I create the game icons at a 256 size and resize them to whatever size I need. Eventually, I will need tiered images for the texture quality setting as well as retina displays on osx.  So every time I create a new icon I have to export several different sized copies. This has gotten pretty cumbersome to do every time I make a change so I finally wrote a script last night that will handle it for me. So now I can auto export all of my photoshop art assets at multiple resolutions just by running a script which is a HUGE time saver. It might be cool to bake this into a build system at some point.

Next up is more work on the advanced crafting system to nail down building weapons and armor!