The Beginning of Something Magical

The Beginning of Something Magical

This week has been mainly another bug fixing week but I put some development into new content. I fixed a few more of the remaining subsystems in the game engine and fixed a number of serious bugs that caused a lot of extraneous processing. Overall, I am pretty happy with how that work has come along.

The other big area I spent time on this last week was to work on the Magic system. Most of this was getting art assets ready as well as working on the underlying code for the Magic System. I removed the trinket “spell” system I had come up with previously and instead put in its place a system that lets you build custom spells. Maybe you want a fireball spell that strikes an enemy with lighting when he is hit or a frost bolt that lights someone on fire. My goal is to give you the tools to create something equal parts awesome and ridiculous. The GUI for this is about 80% complete right now and the basic skeleton of the spell system is in place. 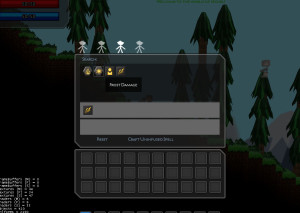 Creating a spell will be a two step process. You first need to lay out the different spell parts in the gui to create the structure of the spell. This generates an un-infused spell scroll. You then infuse this scroll using different items at which point you can name it and choose an icon. After that the spell is ready to use. Using this system it is possible to make the left and right clicks of a spell perform differently if you add spell parts to the second line. For example, you could make the primary attack of a spell launch a fireball and the second spawn a wall of flame.

Next up is more work on the advanced crafting system.