Its been a couple of months since I wrote a project update and I thought I would include the latest developments. Its been a long last 2 months but a lot of progress has been made on the game and most of the basic systems have now been created. I am hoping to reach a state which I would be comfortable calling Alpha in the next month.

Since I last wrote an update I have worked on world generation, new blocks, new entity spawning system, attacking, prototyping new menu ideas, and the crafting system. I spent a lot of time working on abstracting out object information away from Enums in order to make it easier to mod the game in the future. Modding may not be available at launch but I would like to include it before I call the game “finished”.

Lighting is the next big task I am going to undertake as far as the look of the game goes. I am leaning towards going a deferred rendering approach due to the large number of lights I would like to have active on the screen at the same time. Either way, this is probably going to take a significant chunk of time compared to the other game systems.

I’ll leave you with a current pre alpha screenshot of the game. 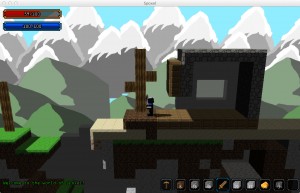 A quick snapshot to show off the pre alpha state of the game.